Shop any 3 products & get a Cream Blusher (Coral Passion) free.

Shop any 5 products & get a Mascara Ultimate Curl free.

Shop any 7 products & get a Lipcolourbox 6 Colours (All Round 1) free. Peek into the vanity of a woman of any age-group and you are sure to find one constant make-up product in each one of them-an eyeliner. It is the most versatile make-up product that suits everyone. It changes the entire look in one swift action and is one of those products that promise to take minimum efforts and yet deliver the most drastic changes.

Eyeliner seems like something which is simple and a no-brainer. But, if you care to discover a little bit more about this multitalented product you will witness that it is not as humble as it might seem.

It is widely believed that eyeliner was the first make-up product that was invented and since then it has gone through rigorous transformation, formula and technique wise. It first emerged as a kohl liner as back in the history as 10,000 BC! Little did the Ancient Egyptians know, the ones who discovered it, that it would be just as important today. By the time of 1920’s some extremely harmful ingredients such as lead, copper and antimony were used to make eyeliners. But thankfully, with the passage of time, safer formulas were originated which are kind enough for sensitive eyes and people who tend to wear contact lens.

The contemporary market is hoarded with the diversity of eyeliners. As the product evolved with the changing times, so did its formulation and usage. Eyeliner is no longer omnipotent and that is why there are a few categories that you should learn about for making a sound decision on which one to grab.

Liquid liners come in a fluid form. There are two kinds of liquid eyeliners to choose from: liner with a brush tip and liner with a felt-tip marker.

Let’s talk about the liquid liners that come with a brush tip. It is truly stated that these liners can be a little tricky to apply. You should always look for a place to rest your elbow while applying the liner. It will give you a steady hand and precision in your application. Liquid liners are the best when it comes to the staying power. They stay for a long time and do not smudge that easily. People with oily skin usually gravitate towards liquid eyeliners due to their non-bleeding formulas.

The brush tip makes it easier to apply the product according to your desired line. With some practice you can master the art of applying quite the right pressure to create thin and thick lines with the brush.

Hoping on to the felt-tip marker liners. This also falls in the category of liquid liners and is the doppelganger of a sketch pen. It comes in handy as there is a lot more control on the application as compared to the previous one.

Regular pencil eyeliners stand somewhere between a kajal pencil and a kohl. It is an omnipotent product as it can be used on the water line, for tight lining, using as an eyeliner and much more.

Kohl eyeliners on the other hand are creamier and easier to apply. A kohl pencil is darker as compared to the previous one and smudges beautifully when used for looks like smokey eyes. Kohl pencils also apply the easiest on the water line as well as an eyeliner due to their smooth texture.

Gel liners are less common than the previous ones and tend to be on the pro side of the game. Usually, the packaging consists of a pot that contains the product and a brush for application follows. They were first used by make-up artists and later came down the ladder for the masses. Gel eyeliners come with waxy consistency and are super easy to blend.

Gel liners are extremely durable and waterproof. These work best in humid conditions as they tend to stick to the skin. Mere water and soap fail to remove gel liners and therefore it is advised to use a proper eye make-up remover to remove this adamant product.

Best Way to Apply an Eyeliner

Eyeliner application is subjective. It completely depends on an individual about how they like to draw out lines and fill them in. But, there sure are some general guidelines for someone who is a beginner or looks for a little guidance in the subject.

Preparing the canvas is the sure shot way to get your make-up do its job seamlessly. Before you start, wash your face, apply a moisturizer and then apply an eye cream or an eye primer. This step is important because it makes the products that you use look vibrant and stay put for longer.

Now is the time to apply the eyeliner. Start with the inner corner of your eyelid, you can leave some space so that it comes out even. Move towards the outer corners of your eyes with small strokes and pressurize subtly to increase the thickness of the line. Once you are satisfied with the thickness of one side, replicate the same on the other eye. You can prolong the line towards your outer corner for some added drama or you can leave it as at the end of the lashed for a minimalist look.

To further wing out the liner, start from your upper lash line and draw a line that with hypothetically meet the end of your respective eyebrow. You can keep the height according to the look that you desire. Now, start from the outer tip of this line and take it towards to inner corner of your eye to create a perfect wing. Fill the wing with the eyeliner and there you have it! A wing.

Mostly, all kinds of eyeliners are confused with kajals and are mercilessly sweeped on the waterline. It is not advised to do so as liquid and gel liners do not sit well on the water line and tend to get messy in the matter of some seconds.

Pencil eyeliners such as kohl and retractable ones are the best suited for lower lash line and stay in the place for longer period of time. Applying eyeliners on the water line can also lead to some infections or reactions as eyeliners are not meant to get in direct contact with your eyes.

Put a finger on any kind of eyeliner that you desire and we at Make-Up Studio have it for you. Our range of eyeliners consists of Fluid Eyeliner, eyeliner with sparkle - Fluid Liner Sparkling, Cream Eyeliner, Precise Eyeliner Pen, Eye Definer and Pencil Creamy Kohl.

Our eyeliner lines come with various shades and formulas and are trusted by the most esteemed make-up artists all around the world. The longevity of these eyeliners make them stand out in the market.

You are getting a free product 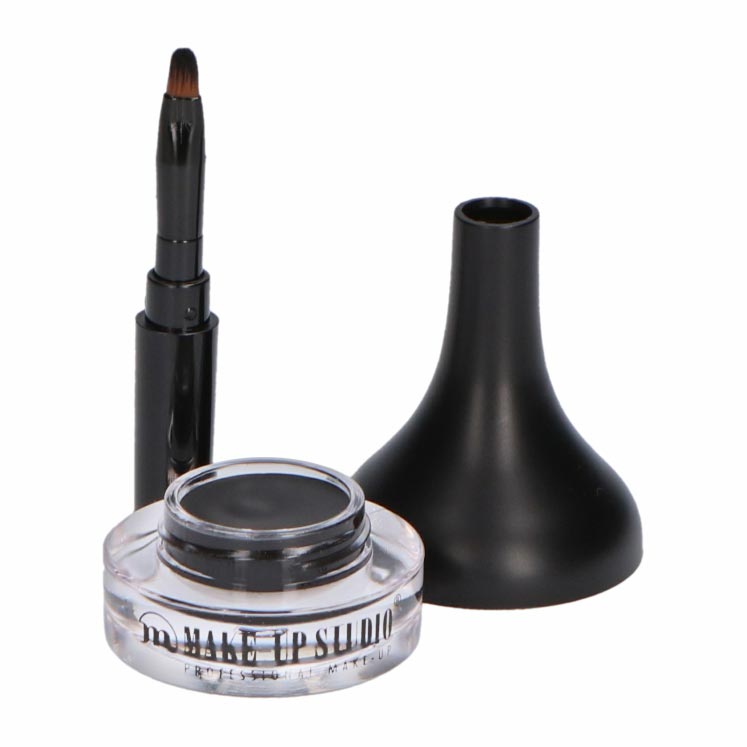